A Contrast of Modern Eco and Old Traditions in Guatemala

Guatemala is a place of many contrasts. In one day you can count a list of observations that are endless: the women carrying a basket on her head dressed in a modern polka dot dress and bright red stiletto shoes; a woman wearing traditional indigenous weaved skirt and shirt walking along the sidewalk chatting away on a mobile phone, a hummer driving down the old cobbled streets of the small rural town of Anitgua; the old man wearing shiny black banker shoes and a courier style jacket on a gleaming Harley Davidson and the most inconspicuous MacDonald’s I've ever seen with the exterior as humble as any street vendor but with an interior as glossy as any 5 star café (outdoor patio with quaint old water feature and all). 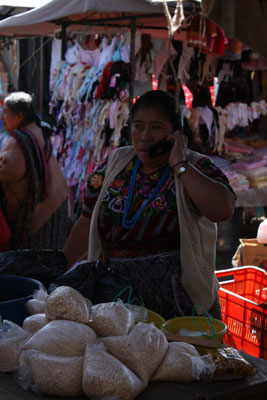 What topped the list was sighting, at the end of the evening, when the cobbled streets were empty, a white stretch limo roll quietly down the road – all this in an old town surrounded by active volcanoes in the middle of Guatemala. I write this as I sit in one of the only ‘cafés’ in the rural town of San Juan, Comalapa in Guatemala called Café Chixot. I´ve ordered the first Mocha (with a slice of carrot cake!) I´ve seen in a month travelling though Central America: not in the big cities of Guatemala or Cuba but here in these ancient streets of Comalapa. But what is perhaps more surprising is that the eco word has appeared to reach these parts. 100% of the coffee in this wee oasis of a café, is sourced from local coffee bean growers and producers, as its tag line suggests: `!Mi café, tu café, nuestro café! (My café, your café, our café). On the back of its newly laminated paper menus is the café’s mission which goes something like this (if my semi-Spanish speaking travelling partners have translated correctly): to ensure the reforestation and eco production is carried out as an alternative way of taking care of and safeguarding economic activity for many families and small cultivators of coffee. One of the Long Way Home volunteers I´ve been working with has been helping to build a primary school out of old tyres, plastic bottles and earth filled sugar bags, told me that the word has already spread about this new eco method of building. Some of the locals, having seen or been a part of its construction have adopted a similar approach to re-using ´modern` synthetic materials to build with. A resourceful lot anyway, it´s no surprise the adoption rate has been so quick, particularly in a country that has taken on the technologies of the modern world (mobile phones and the internet are most prominent) so swiftly, even in the most remote and poorer rural areas. Let’s hope the positive influences from the west outweigh the negative for all we need is another mass produced line of chain stores on another same, same high street in the world!