12 November 2008
And the timing, if plans are given the nod, couldn't be better. The world's biggest environmental body, International Union for Conservation of Nature, recently said that they believe at least twenty percent of all mammals currently face extinction. 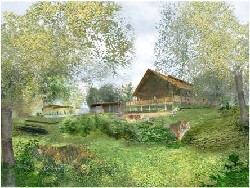 The proposed National Wildlife Conservation Park is set to be 136 acres and based just north of Bristol. The cramped cages of captivity will be non existent at this spa for wildlife consisting of open land, moats and ditches for animals to roam about in. Materials required to build the sanctuary's facilities will be locally sourced with the aim to be a sustainable development. It has also been said that food for the animals will be organic... they'd get it in the wild right.

There would be replicas of the Sumatran lowland rainforest, the Congo river, the Indian Ocean coral reef, Tanzanian savannah, Georgian wetlands, and a Costa Rican swamp.

But not everyone agrees with the idea. Animal activist Will Travers from the campaign group Born Free told the Independent last month that he believed the money would be better spent on actually conserving the wild rather than constructing a ‘tourist attraction'. He pointed out that ‘the Kenya Wildlife Service's budget is about 20 per cent of the figure proposed by Bristol, yet they have to protect 8 to 10 million acres.'
Posted in Eco Issues General Organic News By