Burning Man – Evolution and the Role of the Conscious Eco Warrior

20 January 2010
“The further the spiritual evolution of mankind advances, the more certain it seems to me that the path to genuine religiosity does not lie through the fear of life, and the fear of death, and blind faith, but through striving after rational knowledge.” Albert Einstein, it seems may have been a huge inspiration to the people of Black Rock City at this year’s Burning Man festival. Almost a continuation from 2007’s ‘Green Man’ theme, 2009’s ‘Evolution’ theme philosophized about and demonstrated how we got to where we are, why we find ourselves in this state of ‘eco mania’ and what its part is in the overall evolution of man and our consciousness. If that sounds a bit full on, let me tell you, my mind is still boggling at some of the speakers and surrounding discussions. The vast array of sub topics surrounding this main topic of evolution is phenomenal, especially because it is so intrinsically connected with the age of environmentalism we find ourselves in today. 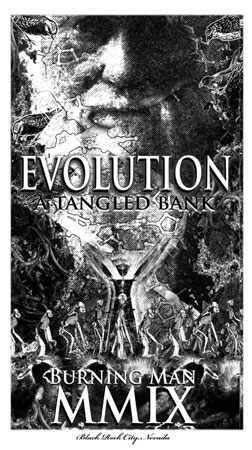 An idea of what kind of seminars and discussions you could wander in to at Burning Man this year (and indeed in many eco ‘conscious communities’ around the world):
Evolution in Action; Evolution of the Conscious Mind; and Conscious Community – an exploration of community outside belonging. Some of the eco oriented workshops included: Karma Chickens’ Power and Water Tour (learn the efficiencies of an experienced desert camp runs their grey water, shower, battery and solar power facilities); Black Rock Solar (shows you how to create your own alternative energy installation); Harvesting Rainwater and Grey water and the Eco-Fabulous Re-Fashion Show. There are also a lot of educational talks (Technomadic Lifestyle Workshop in which I learnt how to combine technology and travel to live and work on the road. Digital nomad-ism and location independent living – interesting tips!), healing workshops (Tai Chi Wake up, Didgeridoo & Sounding Bowl Shamanic Journey and Tool Reflection Meditation) and plenty of fun workshops/installations (Make Your own Hula Hoop, Sunscreen Station, Darwin Monkey Bar, Rock Star Spa Treatments and Giant Lego games.)

There were plenty of ideas to take away from this year’s festival. Education is the key to our evolution that is for sure; something I picked up on the plane ride leaving London in an article in The Times titled “Evolution is fact. End of story”. The journalist had interviewed Richard Dawkins, author of The God Delusion and The Greatest Show on Earth who discusses what is needed from each of us to evolve: ‘many people just don’t know what the facts are. They are simply uneducated. And that’s a fault of us as scientists for not going out there and communicating with them.” Given ‘40% of American believe that the world is less than 6,000 years old (according to Dawkins) its forums like Burning Man that can make this information accessible to the wider ‘uneducated’ world… I include myself in this as there is so much in the studied area of evolution (mind, body and spirit) that I’m yet to discover.

The big message to take away from Burning Man’s ‘Evolution’ theme was to be aware of our individual role in evolving human kind because essentially each action we take, particularly when it comes to looking after our environment, does count on a person to person basis. We are responsible for waking each other up to how we treat the planet and that’s best done leading by example as well as sharing our eco ideas and knowledge gained from others (be it at a festival in the desert or an internet blog site!)
Posted in Eco Issues Eco Tourism General Sustainable Living By