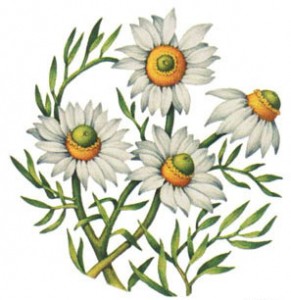 Chamomile - The Plant's Physician is so called because it was noticed by monks in the middle ages, that when planted near dying or sick plants they would recover. Scientists today are still trying to figure out why Chamomile has this healing touch on its garden friends.

There are in fact a number of different herbs that are loosely called Chamomile but only two are commonly used today for medicinal purposes or as sources for essential oils. Anthemis nobilis (or English/Roman Chamomile) and the Matricaria recutita (German/Wild Chamomile)

The name Chamomile comes from the Greek word Chamomaela which means Ground Apple. In Spain the little white flower is known as Manzanilla which means Little Apple. It's easy to see why then that the Greeks, the Spanish and also the Romans used its apple-inspired aroma to flavour beverages.

One of the earliest records of Chamomile being used as medicinal treatment is by the Ancient Egyptians to cure acute fever. Today, the Anthemis nobilis variety in the form of essential oil is used to treat a myriad of health and beauty ailments including acne, hair loss, dry skin, eczema, cold sores, psoriasis, tooth aches, insomnia and gingivitis to name but a few. With analgesic, antibacterial, antidepressant, anti-infectious, anti-inflammatory, antiseptic and antispasmodic properties the Plant's Physician could also be a deserving of the title the Human's Nature Doctor.

Because of its dazzling therapeutic properties you'll find Chamomile in a lot of organic beauty products from creams to hair washes to toothpaste to make up to baby wipes. It's safe to say the organic movement has not missed this golden green treasure.
Posted in General By