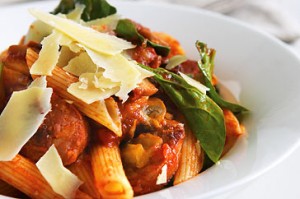 Will serve 4-6 people depending on your appetite. 4 very hungry people could probably manage to put it all away, but we had dinner for 3 then lunch for 3 out of it the next day.

I made this recipe up when I couldn't think what to do with the spinach that came with my veg box. It's really quick and easy and very tasty.

Slice the chorizo to about the thickness of a £1 coin.

Add some olive oil to a deep frying pan. Fry the chorizo, onion and garlic until soft and coloured.
Meanwhile place the tomatoes until the grill, drizzle with oil and sprinkle with fresh thyme and salt and pepper. Grill until softened and starting to brown at the edges.

Add the grilled tomatoes and passata to the chorizo pan.

Add the fresh oregano and simmer for 20 minutes

After 10 minutes put your spaghetti on to boil and at the same time add the shredded spinach to the sauce to wilt. (if you're using baby spinach then add the leaves whole)

When the pasta is cooked drain it, stir the cream into the sauce and then add the pasta and mix until well coated.

(By the way, I later realised that what I had thought was spinach was actually Swiss Chard, but it tasted great anyway!)
Posted in General By