Did you know that you specifically have to ask for fair trade coffee (as opposed to not fairly traded) at some cafes that advertise they have it? I didn't until a friend pointed out Costa's sign stating there was the choice of fairly traded coffee. Even though it was right there in black and white the facts were blurred with a well phrased but altogether fluffy statement that gave the impression their coffee was fair trade. Full stop.

I checked out the other three major coffee chains in the UK to see what was fair about their beans. Here's how they compare: 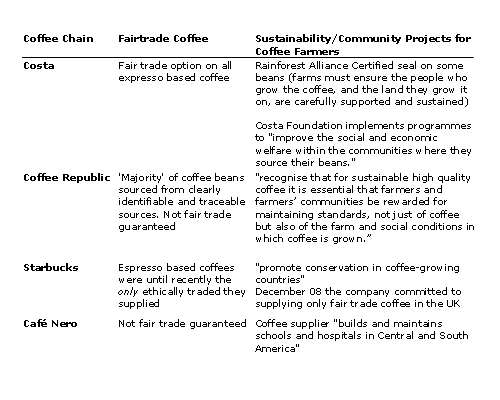 But really it's those small cafes that have fair trade and organic coffee made by devoted baristas, which provide the ultimate in café con leche experience. My favourites are the Rhodes in Greenwich who provide fairtrade, organic mochas (m mmm) plus a whole lot of lovely lookin' pastries to go down very well on crisp Autumn mornings watching runners jog past in the park. Another very big favourite is the Sacred Cafe just off Carnaby Street, which sells the most divine fairtrade, organic mochas!

You can search for fairtrade and organic cafes near you at the Cosy Coffee Shop website - complete with loads of pictures and review.

Posted in General By