Dancing Makes the World Go Round 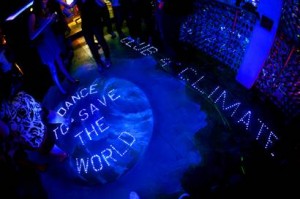 The world's first eco nightclub has opened in London, Kings Cross this month. Surya (Sanskrit translation for Sun God) is its name and earth conscious partying is it's game.

Novelties include a dance floor made of crystals and ceramic that people dance on to create a charge, to generate electricity which powers the club. An elbow nudging, fast-footed bunch of clubbers could provide sixty percent of the Surya's electricity supply. The club also incorporates wind turbines and solar power, which has the potential to provide energy for up to twenty local residents.

Bathrooms include air flushes, waterless urinals and low-flush toilets. Recycling is big on the agenda - glass, plastic, cans etc are granted another life beyond landfill.

Entrance is £10 and clubbers can only enter if they sign a pledge to work towards curbing climate change. Oh and cyclists and walkers enter free - yep, free admission.

Club4Climate is the eco group behind the set up of this club and super rich property developer/eco warrior Andrew Charalambous is the brains and money behind it. Andrew invested £1 million of his own money to create his eco vision based on an 'inclusive' philosophy to combating our climate issues.

A cool (pardon the super bad pun) way to reduce climate change don't you think?
Posted in Eco Issues General In The Press By