Early Rise for the Daffodils 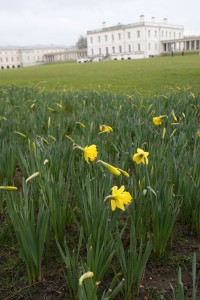 Walking to work last week I spotted from Trafalgar Road small sprouting bulbs on the grass that frames the gate to the Queens House in Greenwich. I was a little surprised considering it was still February; after all we'd only had snow what felt like a week ago. Today I spot a fully-fledged blooming Daffodil and immediately catch myself grasping for the climate change explanation. But we must be careful to do our research on these things otherwise the eco sceptics have fuel to... burn more trees down?

So here's what I found.

Several cultivated varieties of daffodil flower naturally before Christmas, while some wild species can flower as early as October, writes Michael McCarthy, Environment Editor of the Independent. The gold variety (there are pale yellow, white and even red rimmed varieties) typically appears in March but as they're appearing earlier each year has adopted the name February Gold.

Daffodils (the gold variety) were spotted on a bitter cold eve outside an Edinburgh pub in early December 2007. The same golden flower bloomed three months early in West Wales in the Christmas of 06. 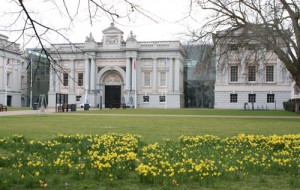 So what do the experts say about our early springs? A 2006 Europe-wide study involving scientists from 17 countries found "conclusive proof" that the seasons are changing, with spring arriving on average 6 to 8 days earlier than it did 30 years ago.

I'm certain the daffodils that lined the Greenwich gates came at the end of March last year and was surprised by their early arrival then. The silver lining of climate change - the flowers spring early? If only that balanced things out.
Posted in Eco Issues General By