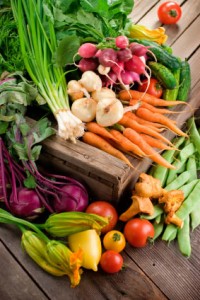 Making headlines in all the major newspapers last week was the result of a report on organic food that it is no healthier than non-organic food. The report in question, commissioned by the Food Standards Agency (FSA), found that "there are no important differences in the nutrition content or any additional health benefits, of organic food when compared with conventionally produced food".

Of course this created a frenzy in the media. The Times reports: "Organic food is no healthier than other produce, according to the Government's food watchdog". Joanna Blythman from the Daily Mail says it's "a cancerous conspiracy to poison your faith in organic food". Leo Hickman from the Guardian says "it's just a shame we can't ask the local birds, fish and insects for their expert testimony on which method they prefer."

Carried out by the London School of Hygiene and Tropical Medicine this is an accurate report as far as the past research that was used to create its findings goes. But there is so much it misses out. It reviews 11 studies only and the FSA itself admits to a lack of research on which to base findings.

It is unclear in many of the studies that ‘certified' organic produce was used. It does not include contaminant content i.e. foods exposed to pesticides, herbicides and the like and it does not compare the environmental or ethical impacts of organic and conventional agricultural practices. Also 4 of the 6 human studies used 20 participants or less and 4 other studies didn't consider the overall diet of participants - "almost akin to feeding a doughnut-eating coach potato and a vegan cyclist organic apples for a week and then comparing the differences in their health" as Mark Anslow from the Ecologist aptly put it. Not exactly meaty evidence to draw strong conclusions from, is it?

The researchers concluded at the end of the report that the evidence base currently available "contains limitations in the design and in the comparability of studies... examination of this scattered evidence indicates a need for further high-quality research in this field." Hopefully scientists pick up on this and we'll soon see an influx of more detailed, comprehensive research undertaken.

Despite all the controversy around nutritional benefit of organic food there is strong evidence to support it's importance for animal welfare, a chemical-free environment, and the avoidance of genetically modified produce. Organic is the way forward for us however you look at it.

What do you think? Will you stop eating organic based on this report? Write in and let us know.

By the way the researchers did find significant differences in nutritional content of organic and conventional foodstuffs including higher levels of phenolic compounds, magnesium, zinc, flavonoids, sugars, dry matter, and phosphorus in organic food. A worthy find considering many of us in the west are deficient of zinc or magnesium.
Posted in Eco Issues General In The Press Organic News By