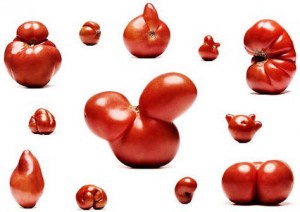 Did you know that up to 30% of food grown in Europe is rejected by retailers because it isn't pretty enough?

The out of shape apple with a nobbly bit or the carrot with two legs was until recently considered unfit for selling even though they were perfectly fit for consumption. Luckily European legislation has changed and less food is now being rejected. But as food prices continue to rise the question still beckons: can we afford to be a nation of fussy eaters?

The answer is absolutely - we should be choosier than ever. We must be thinking with our biodiversity hats on. Fussy is about demanding the freshest, organic, sustainably sourced, local produce. Crisp lettuce, crunchy carrots, juicy tomatoes and food that actually smells how it ought to. We should be so fussy that even the green thumb averse are willing to put on a pair of gardening gloves, turn the backyard soil and nurture a few seeds. Then we can celebrate our home-grown nobbly veg by making delicious and nutritious meals.

Chef and food campaigner Raymond Blanc summed it up the new role of UK's fussy eaters perfectly when he told BBC News recently "The British consumer today has got to understand that when they make a choice, let's say an apple - either Chinese, French or English one - they are making a political choice, a socio-economic choice, as well as an environmental one.

But remember not to confuse fussy with wasteful. Be creative: use leftovers for new dishes. Compost scraps. When you do buy veg only get the amount you need and choose organic and local.
Posted in Eco Issues General By