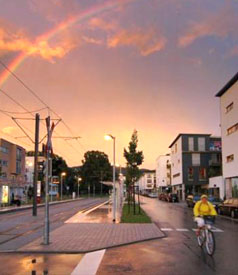 The suburb of Vauban in the German town of Freiburg has taken a bold move to reduce its air and noise pollution; it's removed all the cars from the streets. If you want to own a car you have to pay €20,000 for a space to park it in a garage on the outskirts of the district. Over half the residents have sold a car in favour of the very efficient tram service that will take them to the centre of Frieburg within 15 minutes.

Somewhat of an eco experiment the Vauban project sounds like a great idea for towns where public transport is good and an enthusiasm to tackle climate change by reducing community CO2 emission head on. For holidays or shifting things people can hire a car, become a member of a car club (like Streetcar) or share a vehicle with others.

The suburb was revamped somewhat from it's former army barracks into quite the eco-conscious and sustainable community. Sixty architects were commissioned to recreate Vauban as an alternative to nuclear power.

The sign at entrance to the suburb ‘we are creating the world we want' says a lot about the green intentions of Vauban. Some of the eco-friendly technology that is used in the buildings includes triple-glazed windows, an intricate ventilation system fitted with heat exchangers, solar panels, biological toilets that compost waste, co-generator engines that run on wood chips and 35cm thick walls for superb insulation where just one extra person in an apartment can change the internal temperature.

Heating for a four roomed house costs €114 a year to heat, which is what some neighbouring areas buildings pay in a month. It's no surprise then that Vauban produce excess electricity that they sell to the power companies that run the national electricity grids. Just another benefit of going green.
Posted in Eco Issues General In The Press By