9 February 2010
… if only there were such a thing. One thing I’d heard plenty about before I arrived in this fascinating country (Sam for one was eager to discover what I’d find) was that in the city street there were abundant pockets of organic garden. It made sense being a communist country where international trade is restricted with its neighbouring nations (specifically the USA and Mexico) that the Cuban people would have a somewhat sustainable, localised food culture. The organic part made sense to due to the lack of funds to pay for anything (like pesticides) than what the earth naturally provides. 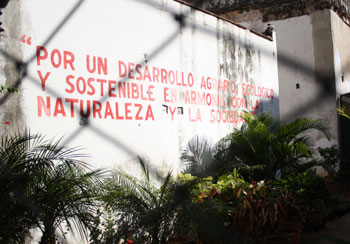 The reality? The first part of my stay was in a small Casa Particulars (like a B&B but, like everything in Cuba, under strict guidelines provided by the government) in Central Habana. The streets here are narrow and grey and the buildings in much of the city are decrepit and falling down which is a real shame as their concrete shells show marks of once spectacular architecture. Even so, it would not be too hard to imagine some greenery around the place but all that could be found are a few small pot plants on the balconies of the odd home or a small 4 x 4 metre plant shop.
So arriving in the country´s tropical fruit off season might explain what it was near on impossible to buy fresh fruit and vegetables (of any kind) except for at a couple of the big hotels. A concierge informed me that he could not find fresh produce anywhere on the streets of Habana, and he was looking hard as his son was ill and needed naturally derived vitamins and minerals to avoid buying expensive medication the doctors told him he required.

The fresh salad at the hotel restaurants (consisting of a slice or two of tomato, a bit of cabbage or cucumber if you are lucky) is imported at a special price by the government as they seem to desperately be trying to attract tourists to the country. There are supermarkets but they are really only 3 x 3 metre shops with a few cans of soup, juice and if you’re lucky super sweet yoghurt. As you can imagine the word “organic” is pretty much unheard of to the majority of people here.

The closest you´ll get to an organic Cuban experience is to stay in one of the Casa Particulars to get close to the people and their culture. The second casa I stayed in was just across the water of Central Habana in Gran Parque Morro and was called El Canonazo. Apart from the tasty food in their decent and clean restaurant (which does include some fresh fruit and vegetables by the way) there are chickens and ducks running freely around the garden. A little bit more professionally run than most casas which are literally family casas (homes) so if you´d prefer an even more organic stay go for one of these. Be warned however, the comforts of the big hotels don’t exist here and you generally pay for what you get.

Either way as soon as you step out onto the streets it’s impossible to miss what this country is all about – 52 Fords, Cuban cigars, rumba and salsa music and a people untouched by the temptations of the consumer-heavy west. You can´t get many places in the world these days that are more organic than that!
Posted in Eco Issues Eco Tourism General Seasonal Food Sustainable Living By