Googling Away the Planet?

Ever wondered what the impact of your Internet searches are having on the environment? Initially you may think it's not a lot - there's no evidence of CO2 emissions being exhausted from your computer screen. Or are they invisible and we just can't see them? No, you can rest assured when you search for that ethical fashion site or a second hand bike on freecycle you are not killing all the trees.

Google say that one search uses 0.0003kWh of energy which contributes 0.2 grams of CO2 to our greenhouse in the sky. Google say that one persons Google use for an entire year emits the same amount of CO2 as washing their clothes for a year. Most of Google's energy usage comes from the huge network of servers and data centres it requires to maintain their services.

Google's figures differ somewhat from a Harvard University physicist who told The Times he works a typical search to generate 7 grams of CO2. Bringing a kettle to boil uses 14 grams of CO2 or 2 Internet searches. 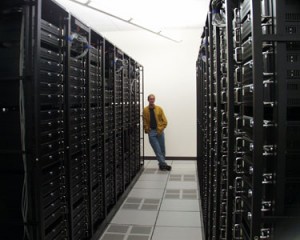 200 million searches are handled by Google daily. That's 40 million grams of CO2 according to Google and 1400 million grams according to our Harvard physicist. Either way it seems like an awful lot of gas. Our question to Google is ‘given the giant Google servers still have to run regardless of whether we search or not wouldn't CO2 still be being emitted?'

While we're on the subject of our carbon footprints, a recent study estimated that the global IT industry generates the same amount of greenhouse gas as the world's airlines. Before we know it we'll be able to measure the CO2 emitted from every inch of our lives.
Posted in Eco Issues General By