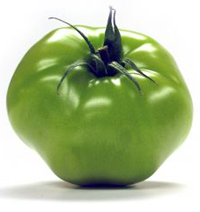 This chutney is yummy with cheese or cold meats. I first made it the year I grew tomatoes from seed and because I couldn't bear to be ruthless and discard the weakest seedlings I ended up with 26 tomato plants. They were totally organic and tasted amazing. We ate an awful lot of tomatoes that summer and had quite a few green ones left at the end of the season. I originally found this recipe on The Foody Uk & Ireland, although my version is now slightly different.

I love making jams and chutneys because it puts my jar collection to good use. I am a compulsive collector washing out all shapes and sizes of jar and saving them for future use. I can't bear to throw them away, but sometimes it gets a bit ridiculous when you can't actually close the cupboard door and I have to give in and put some in the recycling bin. Happily making jams and chutneys means some of my many jars eventually do get reused!

Ingredients - organic and local where possible which is not too difficult with this ingredients list although you might struggle to find organic root ginger and organic chillies: