Green Up Your Car 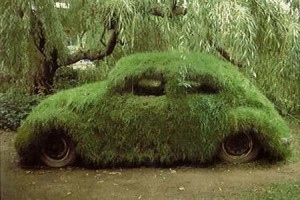 Calling all yummy mummies looking for a safer car - safer for your family, safer for the environment (ok maybe not quite like the one on the left!). Green cars are becoming ever more accessible to the average household so it's good to know what's out there when you're deciding to purchase the next family vehicle. We understand that not everybody can do without a car so we thought we'd look at a couple of the best for those who really do need one to get about in.

To figure out which are the most eco-friendly cars on the market it's important to look at mileage, tailpipe emissions and curb weight - factors the American Council for an Energy-Efficient Economy (ACEEE) take into consideration when they put out their greenest cars report each year. This year they selected the Honda Civic GX, which runs on natural gas and emits less greenhouse gases than cars that run on petrol.

GoinGreen Reva G-Wiz, NICE Mega City and Smart Ed are three great little electric that you can pick up for between seven and ten thousand pounds. The downfall is in their size - they're not suitable for a 4.5 size family. Both the Chevy Volt (by General Motors) and Jeep Wrangler (Chrysler) are bigger sized electric cars.
Posted in Eco Issues General By