How Green Can You Be Living in the Desert? 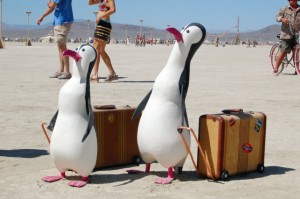 This is my second Burning Man so I know something of what I'm in for. Two years ago I went to the 2007 Burning Man where the art theme the year was ‘The Green Man' (a big incentive for me to attend in itself). This year the community delved into exploring the self-sustaining ethos and eco credentials of Burning Man - which, as you may have gathered, is a burning, carbon-emitting event.

One word - MOOP - gives you an idea of the ecological ideals of this festival. Matter Out Of Place is everyone's responsibility - reuse it, recycle it, as a last resort, bin it. But you won't find bins scattered all over this desert. No, this is truly the Nevada Desert, not some theme-park-the-cleaners-will-deal-with-later place. Burning Man is a Leave No Trace Event and everyone is expected to clean up their own act. It can be a hard reality of sustainable living - dealing with your own... errr... rubbish. Here, every little bit of scrap you create or bring you must also take home! After a week of desert shenanigans the potential to take home a trailer load is possible if you don't plan well. 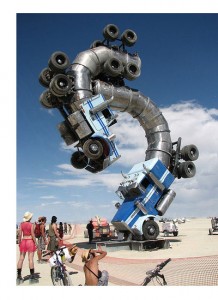 Bicycles and art cars are the only form of transport other than your own two feet to get around. Thankfully this desert playa is hard clay not soft sand. Riding a bike around the desert is something else. You feel like a cross between a Mad Max movie extra and a Traveling Wilbury. You can ride from the dusty desert roller skating rink to the Crude Awakening art piece within minutes on your trusty bike. There's just so much to explore that two wheels can help no end.

Always working to reduce the environmental impact, The Green Man, took the opportunity to find solutions to improve it further. Burning Man is a place of experimentation as much as it is play and survival, and tends to attract some of the worlds most innovative, progressive thinkers. For example one year hundreds of pastel green bikes were gifted to the community and spread around the playa for anyone to pick up, borrow and re-lend anytime, anywhere (very handy and ingenious idea indeed). Rumour has it was the founder of a certain giant search engine (rhymes with boogle), a burner himself, who made the drop. 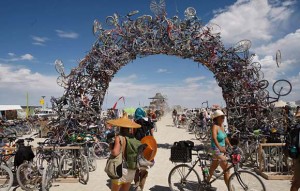 Some of the ingenious green inventions and eco highlights at 2007's Green Man were the solar photovoltaic panels to power the Green Pavilion (an all-eco education area under the man); 11,000 gallons of petroleum were replaced with reclaimed veggie oil from nearby Reno to power 85% of the cities generators; experimental biofuel technologies, including a greenhouse-gas eating algae; and The Mechabolic, a trash-to-fuel land speed racer art car that produces a potent carbon fertilizer by feeding it organic matter (in other words, it runs on food scraps).

Another green project inspired by the earth guardian ethos of Burning Man is the Cooling Man. Initiated by an environmental scientist and an economist, this project aims to encourage burners to buy ‘carbon offsets' to cancel out the greenhouse gas emissions generated during the festival. It has been estimated that if every burner offsets 0.7 tons of carbon then Black Rock City would be the first carbon-neutral city in the world.
Posted in Eco Issues General By