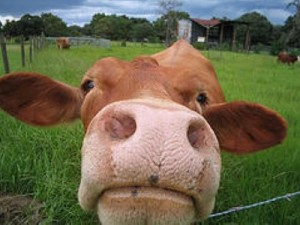 With the credit crunch in full swing more of us are using price as a determining factor as to whether we choose organic over non-organic. Be it in your morning cuppa or on your cereal, milk is one daily staple in most of our diets worth writing on the organic side of the shopping list.

Cow's feed that is grown without pesticides will provide more nutrients for the cow, increasing the nutritional value of their milk that is ultimately passed on to us. Grass and clover fed organic cows (as opposed to grain fed, conventionally reared cows) have higher levels of conjugated linoleic acid (CLA) alpha-linoleic acid (ALA), alpha-tocopherol (vitamin E) and three carotenoids (beta-carotene, lutein and zeaxanthin), according to a study this year from Newcastle University. The fatty acid CLA was found to be 60% higher in organic milk and may protect against cancer and other health problems.

The university study also revealed that nutritionally desirable fatty acids and antioxidants were highest in milk produced during summer, when the cows are eating fresh grass and clover. Though some conventional farms allow their cows to forage for feed this is by far a more common practice of organic dairy farmers.

Organic cows are also not treated with bovine growth hormone (BGH), a hormone which is used to increase the amount of milk a cow produces. It is believed that these hormones could raise the risk of certain cancers. Organic dairy farmers also avoid antibiotics where possible. If a cow does fall ill it is separated from the herd for a period of time so as to avoid contamination of the whole milk supply.

It's comforting to know organic milk doesn't only taste better but is packed with more nutrients than conventional, non-organic milk. One supermarket sells organic milk for just 8p more than regular milk!
Posted in Eco Issues General In The Press Organic News By