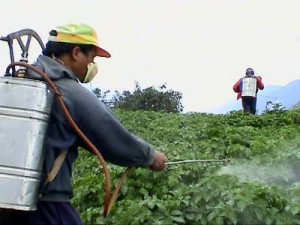 Here's a bit of news that that has reminded me, once again, why I buy organic food - an EU food monitoring report has found that half of all fruit, vegetables and cereals are contaminated with pesticides.

Apparently this is quite a significant increase from levels measured five years ago - and that's not too long at all when you consider the mounting evidence to support the harmful effects pesticides have on our bodies and our earth. The EU report also found that five of the pesticides most commonly found in our food have proven to be ‘carcinogenic, mutagenic or disruptive to the hormonal system.' PAN (Pesticide Action Network) Europe say that these are the worst pesticide results they've ever seen.'

In a special press release commenting on the EU food monitoring report, Elliott Cannet, Coordinator of PAN Europe said 'a record proportion of fruits and vegetables are contaminated, while twenty three pesticides were detected at levels high enough to present an acute risk to public health - according to the EU's own risk calculations.'

Yes, I think I'll be sticking with the pesticide free variety thanks.
Posted in Eco Issues General Organic News By