Powering Up With Onions (minus the smelly breath) 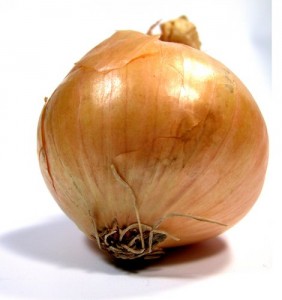 Yes, you heard it first here folks, a new source of energy has been utilized from the cook's dinner staple - the humble onion. An onion processor in California which cuts the tops, tails and skins off onions has devised a unique electrical system that is powered by their waste onion. Gills Onions loses 35% of the onions or 300,000 pounds of waste each day in the process of dicing, slicing and pureeing onions which it sells on to wholesale and retail customers.

Gone are the days when Gills sends out its waste onions to fields to decompose naturally into the soil (which is a great idea if it weren't for the lack of fields around town and the insects that onions attract).

So, Gils has invented the AERS or Advanced Energy Recovery System. The AERS turns all their onion waste into electricity and cattle feed. Basically the system squashes out all the onion juice, which is then goes into an anaerobic digester to turn into methane gas. The gas is pumped into fuel cells and is used to form electricity. The onion solid is what is fed to the cattle.

Gills 300,000 pounds of daily onion waste makes about 600 kilowatts of electricity every day which is enough to run up to 40% of the companies factory. Gills says that it expects to take about US$700,000 off their electricity bills each year and save about US$400,000 in waste disposal costs. That's a lot of onion mula.

Apparently some of Gill's neighbours are keen to get in on the action - both a carrot producer and winery are apparently interested in learning more about the system. Everyone plays their part in looking after the earth.
Posted in Eco Issues General By