Predicting the Weather with a Little Help from Nature 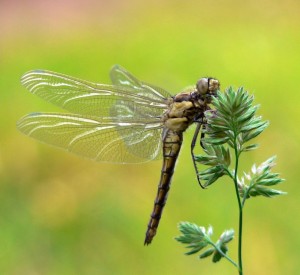 Those of us in the (over)developed world could do with (re)learning some of the old stories of communities who use the traditional method for forecasting the weather (beats relying on a flaky weatherman to determine whether you take that trip to the beach tomorrow).

Let's look at the farmers and fisherman of Vietnam. For generations those that still follow the traditional ways have been predicting floods, storms and droughts by tracking nature. In the drought prone region of Ninh Thuan farmers take the dragonfly's opinion on such matters on overhead climatic conditions. If the dragonfly travels low to the ground, rain is sure to be on its way; if it travels high, the sunshine's will be out for that picnic.

This is just one example of what a group of aid agencies is taking note for a project to find out whether whether the indigenous knowledge passed down the generations through proverbs, folk songs and legends still hold true in this time of climate chaos.

The indigenous people know a lot about disaster adaptation and the aid agencies are looking to collect this information. This will be used to help them create programs to reduce the risk of natural disasters in Vietnam; it's coastal regions a sitting duck for rising sea levels which will be ruinous for rice production in the country as well as the tens of thousands of families residing there. Climate change is expected to hit Vietnam very hard.

There is strong evidence to support this research project. A UN report found nomads on the coast of Thailand were one of the communities spared during the 2004 tsunami because they used their passed down knowledge to see early changes to the environment and flee to higher ground.

Nature appears to be unleashing its wrath on us. But it's simply doing its thing, self-preservation and all that. We are fools if we overlook the hand it lends and the clues it gives for our preservation also.
Posted in Eco Issues General By