24 January 2010
Something I'm quickly realising about the states is that it has just about anything any person could possibly require: glamour and glitz (Hollywood luxury touches most of the big cities), extra mammoth portions of fries (even a poor man cannot starve here), history (Native American national parks and Statue of Liberty type monuments scatter the country) and of course some of the most spectacular natural landscapes  in the world (from the dense Redwood forests of Oregon to the stunning Californian coastline to the arid desert-scape of Nevada). It is a beautiful country, despite many of us foreigners more obvious political and cultural objections to it. 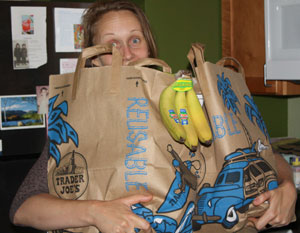 There is one thing I'm struggling with finding: fresh fruit and vegetables minus the additives. There is definitely fresh produce out there; it's just that it's in concentrated areas. Forget organic in Walmart (the budget friendly supermarket). There is fruit and veg but it's perfectly supernatural (if you know what I mean). I spent a good four hours shopping in there for a 9 day journey. I had to check the ingredients list on every single item I picked up for signs of 'edibility'. It's not normally a finicky, health obsessed characteristic of mine but soon became one as I discovered all sorts of nasties in apparently 'natural' and some 'organic' products. If it wasn't doused with abstract ingredients it was packed with salt and sugar - the apparently 'wholegrain' (grainless) bread tasted like a sweet bun and the nuts tasted like they were grown in the sea.

But hurrah! I've finally found a place (outside the organic hippydom of San Francisco) that feels a little like Greenwich (London) in terms of the fresh produce and organic products on offer. 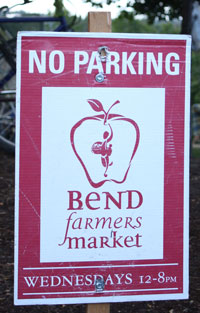 Bend in Oregon, a small town of 80,000 people has a beautiful little park and lake beside which a farmers’ market is held each afternoon. Yet to find a market with dry foodstuffs I have indeed found a few cafes with organic fair trade coffee which I'll be heading to shortly. It seems Oregon has a couple of these organic gem towns. I passed through another small town called Ashland that had an excellent local consumer food cooperative which invited anyone to invest a 'one-time, refundable equity investment of $100 for the 'long term health of our community'. Another dime I found in Ashland was a funky little café called Grilla bites which sold the most delicious organic salads and 'grillas' (toasted panini style spelt bread sandwiches). The highlight was the extract from the book Another Turn of the Crank by Wendell Berry on the back of the Grilla Bites menu which highlighted some of things required from the people for a community to flourish and last. A few points I liked were: always supply local needs first. (And only then think of exporting their products, first to nearby cities, and then to others); see that the old and the young take care of one another... the community knows and remembers itself by the association of old and young and; always include local nature - the land, water, air and native creatures - within the membership of the community. 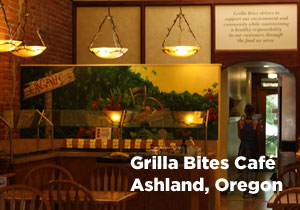 It seems much of the real organic places are huddled together in the towns that want it most and work to building the demand to support it. When fresh organic produce is rare it seems to me it is in the places that lack community, where every street looks the same and where there is a Wal-Mart in view (which is often - think MacDonald’s every 100miles along a highway and you'll envisage the Wal-Mart effect). Consumer choice makes the community and if you choose genuine organic you create an organically grown community right!?
Posted in Eco Issues Eco Tourism General Seasonal Food Sustainable Living By