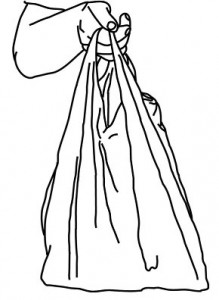 Plastic bags take 1,000 years to decompose - who's up for banning them? Not all of us just yet it seems. A target set by the seven of the biggest supermarkets (Tesco, Asda, Sainsbury's, Co-op, Marks & Spencer, Somerfield and Waitrose) to reduce plastic bag usage by 50% by May 2009 has not been met.

It was the independent waste watchdog Waste and Resources Action Programme (Wrap) that was given the task of reporting on whether the target had been achieved. They say the supermarkets collectively reduced plastic bag consumption by 48% from 870 million bags to 450 million bags in three years since May 2006.

At 2% shy of the target some would say this is a good try. What's not so good is that Tesco have released misleading figures about their usage saying "our customers are now using more than 50 per cent fewer carrier bags than they did before". In fact, Tesco had calculated its figures to account for increased sales and was worked out differently to WRAPs calculations. It's believed that Tesco's actual reduction was significantly less than 50%.

Those of us who opt for the reusable shopping bags would question why we are bickering over the figures - shouldn't we be focusing energies on banning the plastic bag altogether? Such a simple, cost effective solution that would certainly put a dent in the 4,700 tonnes/month of supermarket plastic bags sent to landfill.
Posted in Eco Issues General By