Setting Sail for the Plastic Seas 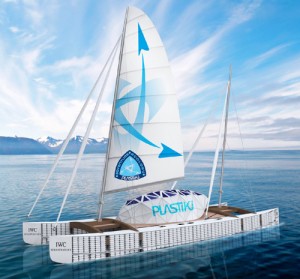 Picture a man in a plastic boat setting sail for the sake of our rubbish spoilt oceans and I bet you don't see a billionaire banking heir steering at the wheel. David de Rothschild will set sail from the coast of California for the Pacific in a few weeks times in a boat, aptly named Plastiki, in an effort to raise awareness of the world's largest environmental water polluting rubbish dump - the Great Pacific Garbage Patch. Covering hundreds of miles the patch has thousands of pieces of plastic rubbish which has been caught up in the areas circulating ocean currents.

Plastiki is made from plastic bottles and other recycled waste. It's taken three years and millions of dollars to design and create. David and a crew of six will travel from San Francisco to Hawaii, to Midway Island, Bikini Atoll, Vanuatu and end in Sydney - not a bad path for a plastic boat.

Discovered by oceanographer Charles Moore a decade ago the patch is apparently a sight for sore eyes. "I was confronted, as far as the eye could see, with the sight of plastic," he recalled to the Observer. From volleyballs, to plastic coat hangers, toothbrushes, bottle caps and syringes - you name it, it's likely to be there. Scientists say that this plastic patch is having devastating effects on ecology with fish, birds and other sea animals chocking to death on the plastic having mistook it for food. These plastics (particularly the PCBs or polychlorinated biphenyls) and pesticides in the oceans are making their way up the food chain so it's not just ocean life that is at risk - we may just be slowly poisoning ourselves.

You can support David by visiting his blog where he will be keeping us up to date with his plastic adventure with photos and video clips. He'll also collect water samples to indicate exactly how bad the plastic pollution is getting.
Posted in Eco Issues General By