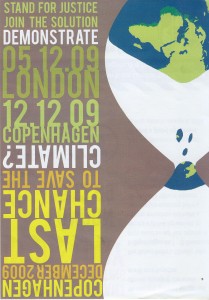 December 12 2009 is a date already circled in many a devout climate change activist's diary. From Istanbul to Costa Rica people everywhere are planning peaceful protests to call world leaders to take urgent action on climate change as they meet in Copenhagen on December 7-18 this year at the annual UN Climate Talks.

The Copenhagen Climate Talks are the only chance to secure emissions reductions agreement amongst countries before the Kyoto Protocol runs out. Since scientists give us ten years before climate change becomes uncontrollable this is an exceptionally important international meeting.

The demonstrations are a 'Call to Action' to ‘demand that the long-industrialised countries that have emitted most greenhouse gases currently in the atmosphere take responsibility for climate change mitigation by immediately reducing their own emissions as well as investing in a clean energy revolution in the developing world.' 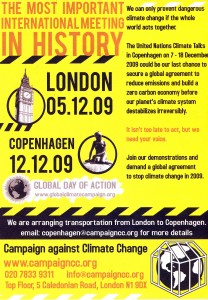 The poorest countries in the world are already being hit hard by the effects of changing climates. The Call to Action demands all those ‘who have the economic means to act, must therefore urgently and decisively do so.'

If last year's December demonstrations are anything to go by there will be a lot of support at these marches. The Global Climate Campaign website gives updates and photos from the 95 countries that participated last year. Thousands took to the streets in London outside parliament carrying banners like ‘No New Coal', No Third Runway' and ‘Time for a Green New Deal.' It's predicted they'll be even greater numbers attending with powerful messages this year round as more people embrace the idea that we all need to take action and that includes nudging the government to increase its urgency on tackling environmental issues.

The Global Climate Campaign website gives details of what's happening where during this year's summit.
Posted in Eco Issues Events General By