The Organic Heart Series - People Behind The Organic Companies You Love

Today we interview Stuart Burlton, director and chief operating office of So Organic.

What are the most difficult elements of working with a small business?
Everything that needs to be done needs to be done by a small number of people. So you don't have a specialist you can go to, to fix computers, you don't have a specialist database management person to go to etc. Everything must be done by a small team, and it's about managing that small team well and making sure everybody can do what they want to do. Getting the right people in the company is important but we don't have a problem with that because we already have the best people you see.

What do you love most about your job?
The people, the staff. I like working with everybody. Including my wife when she's grumpy.

What are the most commonly asked questions you get about your products?
Do they contain SLS. Do they contain synthetic fragrance. Is this product organic? People say ‘I want a product that is 100% organic and there are a lot of products that you just can't get in a 100% organic form, like toothpaste. It just isn't possible at this point in time. It can be difficult to get this across to a customer. When they say 100% organic, what they actually mean the majority of the time is ‘I want a product that doesn't contain any of the chemical nasties.'

Are you involved in any ethical/charity/eco friendly sustainable projects or organizations outside of SoOrganic?
Sam and I work closely with the Soil Association, which is a charity. We go to all their events. Also once a year we give excess products to charities. Last year we gave Remarkable recycled stationary to Romanian orphans.

What environmental issues are of most concern to you?
Melting of the global icecaps and the rising temperatures in the world. The speed at which the polar icecaps are melting is a big one. The amount of waste we throw away and how much of that goes into landfill - that's the second one. One on more of a social slant is the fact that countries, putting it simply, don't work together and end up going to war. People just need to communicate more and be more tolerant of each other.

What natural beauty issues are you most concerned with?
The amount of chemicals in body care products. If everybody realised that 60% of what you put onto our bodies goes into our bloodstream and that some products out there have ingredients that, if you put them in food would be illegal... when you really think about that... wow. Remove those chemicals would make a huge difference to people's bio pattern.

If you had a million pounds what would you do with it?
Holiday. I'd put it towards educating the public. I'd probably put it into a PR campaign because public relations is the best way you can get out there to make people more aware of what's really happening in the world. I'd link a PR campaign with Utube type videos, things like that. In terms of specific issues, I'd focus on pollution and making people aware of the consequences of lifestyle today, like the consequences of putting that plastic bottle into landfill and not recycling it. If you help people understand consequences more they'll think about what they're actually doing more. If you tell someone to do it, it's just not as affective. I'd also pay off my credit card... and my loans... and my company loans... I'd be left with 50p then!

What do you think customers are most concerned with?

Personal issues rather than altruistic ones. I think they are concerned about environmental issues up until the point that it may directly affect them in a not so easy way. One of the reasons we are so successful is because if someone wants less chemicals in their life (and therefore have less of an impact on the environment) they can obtain this easily by shopping online. I think if it wasn't so easy, if you couldn't buy these natural products so easily, health food shops probably wouldn't be much busier because people like the ease of shopping online. If things are easy for them I think they are more environmentally aware and are more willing to integrate more eco beneficial things into their lives.

Where do you get your environmental information from?

The Ecologist. Newspapers and the television. However it can be a little bit of ‘flavour of the moment.' For example the icecaps are melting faster than they ever have done. It's a huge issue however it's on the mainstream news agenda one day every six months. People go ‘oh it's a big disaster' and then they go ‘I haven't heard about it for a while so it must be ok now.' But it's not. I don't think there's enough information out there. I think there should be more emphasis from political parities. I actually don't care if it's politically expedient or not as long as the environmental agenda is put firmly to the top. But it circles back to people's social situation. Even if they're environmentally aware, given how the economy is at the moment, environmental issues go straight out of the window. People become worried about themselves - enter Maslow's Heirachy of Needs. The environment needs to be put firmly on the agenda. The only party that really makes it a huge priority is the Green Party and unfortunately they're not a huge political force like they were in the United States. The emphasis on the environment is sliding. Nine months ago everything was going fantastic. Zac Goldsmith went to the conservative party and said, yep ok I'll work with you on the green agenda, which is great but now that things have changed with the economy the way it is, what can he do now?

What is your worst habit?
Acting like a headless chicken sometimes when I'm under pressure.

Who's your eco role model?
Samantha. She's my hero because she's passionate about what she does. If she's given the right vehicle she could become a real power out there... a role model for the general public. I could see her doing an organic type TV programme presenting organic products - there's no one out there that is as passionate and knows as much as she does. She's photogenic, she looks good and I think the public would really identify with her. 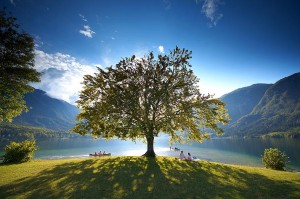 From an environmental perspective how do you envision the world in 30 years time?
I'd like to be an optimist and I'd like to think the world will be a lot less violent and people have more respect for one another. However will it turn out like that? I don't know. Environmentally... unless we sort ourselves out very quickly we're going to have big problems in the future. I'd like the world to be a nicer, calmer, more positive and adventurous place.
Posted in General By