These Locals Know A Lot

It's quite astonishing what you can learn on a walk home from work these days! Yesterday I decided to walk home via the backstreets of Greenwich and stumbled across the old building of Trinity Hospital. I've wondered past the small white quaint little hospital from the riverfront side but never from behind. As I walked past I noticed twelve engraved lines on the centre of the wall front (where a clock may sometimes be). At the end of these lines, six pointing northwards, six pointing southwards was the twelve symbols of the zodiac, each a different colour, each simply and beautifully carved in to the wall.

After admiring it for a short while I travelled on, at which point an elderly man with a friendly ol grin popped out of his front door to say hello. "You looking at the white building over there?" Mr Local proceeded to tell me all about the hospital, the old power station and tower. The sun was shinning, I was in a cheery mood and open for a chat. This is what I learnt... 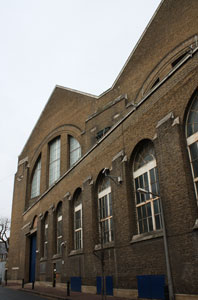 The Royal Navy College down the road (now Trinity University) once had a small ten kilowatt nuclear reactor on premises which was used to train officers who would be working on nuclear submarines. Mr Local use to work as one of the lab technicians.

Trinity Hospital is now a homestead for retired naval personnel. It offers the likes of former lighthouse keepers and sailors a tenancy once they finish their tenure in the navy. The star signs on the wall I was pondering is a calendar based on the astrology calendar and is illuminated at night, just as the Greenwich Meridian green laser lights up the sky in the evening.

Tomorrow I'll tell you what Mr Local told me about the old power station and tower next door to the hospital.
Posted in General By