The United Nations recently released a study which positively up's the benefits of organic farming in the face of a global food shortage and a starving Africa.

Achim Steiner, head of the UN's Environment Programme, told the Independent when the report was released that the UN's findings indicate ‘the potential contribution of organic farming to feeding the world maybe far higher than many had supposed' and it ‘could make a serious contribution to tackling poverty and food security.'

The environmental benefits of organic farming were also highlighted in the report. These include greater soil fertility and better water retention, which leads to greater resistance to drought. Plus farmers save money on pesticides that they can use to buy better seeds. Many studies have also found that organic farming can provide higher yields than industrialised farming.

The UN's report is good news for the organic movement and hopefully, with the support from more international organisations, governments and powers that be, it will lead to a healthier Africa - land and people. 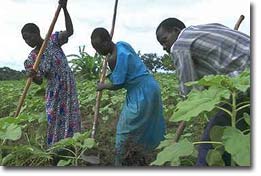