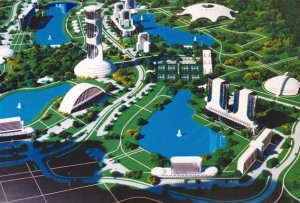 White dome shaped houses, sea cities, eco-focused space stations - is this the face of the future? Yes according to Jacque Fresco, founder of The Venus Project. A plan and vision for a global change in the way we all live, The Venus Project sets out to address some of the earth's greatest challenges faced today and in the future. Social problems like unemployment, violence, poverty and over population as well as environmental problems like global warming and the finite level of the earth's resources are all within the broad spectrum of issues to be resolved in this blue-print for a new world civilization.

This new way of life would involve sharing a little more on an individual as well as nation-to-nation scale. ‘Eliminating elitism, technical or otherwise' is one of the projects many objectives. As is ‘stabilizing the world's population through education and voluntary birth control'. But the first goal listed on the projects website is ‘realizing the declaration of the world's resources as being the common heritage of all people' - sounds like something indigenous people have been wanting for centuries.

Blueprints for the technologies and buildings have already begun for an experimental city. So what's with the dome houses and ocean cities? Well the domes require less material to enclose a certain area, they're made of concrete to preserve forests and the shape gives maximum strength which, built effectively, can withstand earthquakes, rodents and fire. The ocean cities could relieve the land of population pressures and the space station could monitor the earth's resources.

Turning from a money-based economy into a resource-based economy as the Venus Project proposes may ultimately be the only choice we have if the world continues as it is.

If you'd like to find out more about The Venus Project visit www.thevenusproject.com
Posted in General By