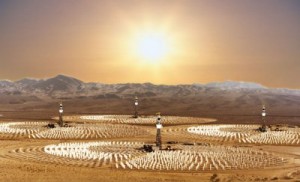 Australia is set to build a Aus$ 1.4 billion solar plant that is capable of producing 1000 megawatts which is about three times the amount of the current largest solar powered electricity station in California.

Australia's Prime Minister, Kevin Rudd has said the intention is to exploit the countries ‘biggest natural resource' and make Australia a leader in renewable clean energy.

Not only will this project boost economic activity, create jobs and opportunities for business it will put Australia in good stead when it joins the 80 other member states this year to sign the International Renewable Energy Agency (IRENA) statute. The statute encourages' the rapid transition towards the widespread and sustainable use of renewable energy on a global scale'. Neither the UK or the US have signed the statute.

The image above is an artist's impression of what the mega solar energy station will look like. It's due for completion in 2013.
Posted in Eco Issues General By